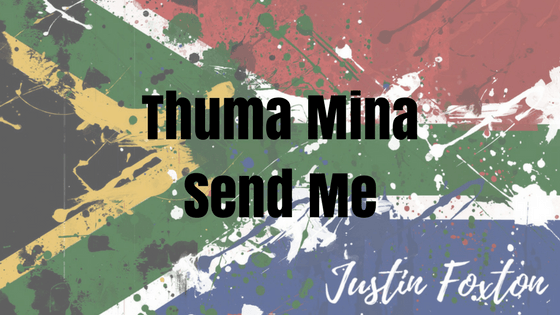 “I wanna be there when the people start to turn it around, when they triumph over poverty.

I wanna be there when the people win the battle against AIDS.

I wanna lend a hand

I wanna be there for the alcoholic.

I wanna be there for the drug addict.

I wanna be there for the victims of violence and abuse.

I wanna lend a hand.

From “Thuma Mina” by Hugh Masekela, as quoted by Cyril Ramaphosa in his State of the Nation Address.

Much has now been written about President Ramaphosa’s State of the Nation Address, but I want to focus in on the above quote. Its use was a tactical master-stroke and very far from fluffy or sentimental. These words were chosen deliberately and are indicative of where our new President is taking this nation and what he expects from both himself and us.

Firstly, he let us know something of the man he is and what his main purpose will be; that he is a man-of-the-people in a very real sense; a man who would direct his energy towards the alleviation of the pain of the oppressed, the down-trodden, the sick and the poor of our country. This was a stinging indictment of his predecessor; it was a brutal poetic slap-down of our last “man-of-the-people” President; the one who gleefully, irresponsibly, heartlessly accepted this title whilst singing and dancing and chortling and raping us.

The second thing the President did by quoting these lines is that he inspired us to join him in his mission to help “turn it around”. “Thuma mina” – “Send me”, was his version of the Obama campaign cry, “Yes We Can” in which the former US President brilliantly commissioned both himself and his fellow citizens in these 3 simple words.

In an unusually personal piece by Huffington Post SA Editor-at-large Ferial Haffajee she said: “Suddenly, I want to lend a hand, to be sent. I haven’t felt that for the past decade.” This response is surely what Ramaphosa was aiming for – the mobilization of our people – and has surely been said (or at least felt) by many across the country.

But for this quote not to become a distant, feel good memory; for it to become part of the essence of who we are and how we operate as a nation in the post-Zuma dispensation, we need to spend some time with it and ask what it means for us.

For Haffajee and her colleagues in the media former Editor-in-Chief of the Mail and Guardian Anton Harber hit the nail on the head in response to Haffajee’s article: “The best way you can lend a hand is to continue to be a vigilant, active, critical citizen and journo.” For our new President, we all have our views on what this should mean for him.

But for the ordinary man-in-the-street, what do we do to “lend a hand”?

In the quote Ramaphosa talks to several key issues that affect people daily:

What can we do to help ensure a better life for our people in these complex and overwhelming areas? What questions should we be asking of ourselves if we want to say with our President: “I want to lend a hand, send me”

Before we go to some possible questions, let’s be clear that “me” may include individual actions and that is good and necessary. But let us not discount me in relation to others. It’s all about working together in some form of small “community” grouping – whatever that looks like for you – to help turn things around bit-by-bit. You may already have a group that exists for other purposes – from church home groups to book clubs to a running group – you may want to start a group.

The point-of-departure for this “lending and sending” type of work, is dialogue. The basis of this dialogue should be to come together in these small groups and ask good questions that will spark new seeds of creativity and passion in us. As Albert Einstein famously said: “If I had an hour to solve a problem and my life depended on the solution, I would spend the first 55 minutes determining the proper question to ask, for once I know the proper question, I could solve the problem in less than five minutes.”

Here are some questions that might help the dialogue:

As a community/neigbourhood/district, what challenges do we face? Which area of challenge would we like to help in? What gifts, talents and resources do we have in this group (or could we mobilise) that could be useful? How could we begin doing the necessary work using the resources we have?

If you would like assistance, training or resources to help get started, local NGO the Democracy Development Program (DDP) is hosting a workshop called “Send Me”.

Justin Foxton is founder of The Peace Agency.  His writing is dedicated to the memory of Anene Booysens, Emmanuel Josias Sithole and Suna Venter