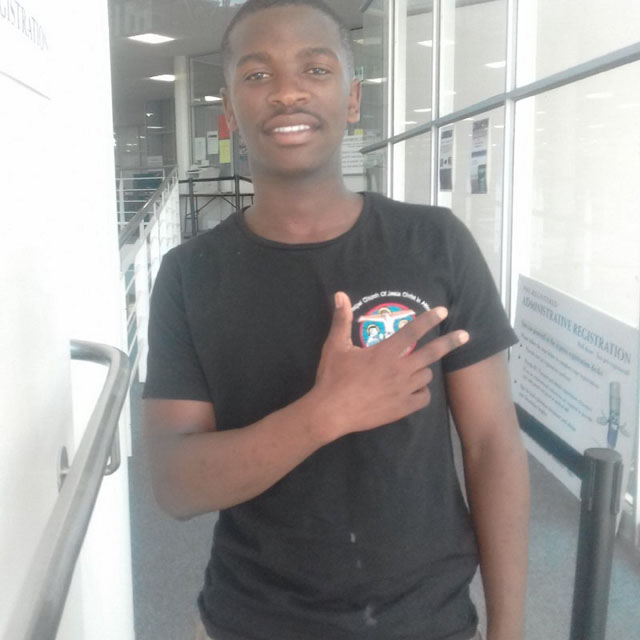 Eastern Cape matriculant Lutho Jimana did not let his long daily walk to school, his overcrowded home where it was difficult to study, nor financial constraints due to his mother’s unemployment get in the way of studying towards his childhood dream job.

This month Lutho began his studies at Rhodes University that will ultimately see him become a scientist.

Lutho beat out nearly 100 fellow matrics at the end of last year to take the top spot in the Eastern Cape in the Engen Maths and Science Schools programme. Having scored 94% for science and 85% for maths, he credits the extra lessons provided by EMSS for his outstanding results

Every day Lutho walked an hour from his home in Gqala, East London, to his classes at Tsholomnqa High School, never losing sight of his lifelong vision of wearing a white coat working in a laboratory.

He is just starting the four-year journey to achieve his Bachelor of Pharmacy degree, and says he will tackle the challenges ahead the same way he achieved such incredible success at school.

“It’s all about hard work, managing your time and your priorities,” says the 18-year-old proudly, declaring further that he does not drink or smoke, and attends church every Sunday.

He is however adamant that he could never have achieved such excellence without the commitment of the Engen programme teachers, who gave him the support he so desperately needed over three years from Grade 10.

“I went to the classes every week and they taught me so much, especially the parts of the syllabus that my teachers at school never taught me. I realised I was missing out on so many things, and I don’t think I would ever have done so well if it wasn’t for the Engen teachers who filled in all the gaps,” says Lutho.

He was also inspired by his principal, Uncle Sonwabo Jimana, who he says helped motivate him through all the difficult times, acting as a great role model and helping him apply for his place at university.

It is exactly youngsters like Lutho that the EMSS programme aims to assist, with a view to not only see them achieve personal success, but also to tackle the bigger issue of helping address key national skills shortages in engineering, medical and other technical fields.

A total of 555 matrics from across South Africa benefited from Engen-backed extra classes in English, maths and science last year, achieving an impressive 94% pass rate overall. The East London EMSS centre, one of nine in South Africa and the one which Lutho attended, attained a 96% pass rate. The EMSS centre in Cape Town and two others in KwaZulu-Natal boasted 100% pass rates.

First and second place nationally in the 2017 EMSS class went to Makyle Naidoo and Nokwenama Gumede respectively, both of KwaZulu-Natal, followed in the top 10 rankings by two learners from the Western Cape, Uri Engelbrecht (3rd) and Zakiyyah Petersen (4th), with Johannesburg’s Ester Shuping taking fifth position.

Adhila Hamdulay, Engen’s Corporate Social Investment Manager, says the company is delighted to see Lutho get the chance to pursue his bid to become a scientist.

“We are so incredibly proud to see him and all these learners, who epitomise the quality of the young people we work with around the country every year, do so well. Our ultimate reward is to help set them up to pursue stimulating careers that will change their lives, but also benefit the economy as a whole,” adds Hamdulay.

The EMSS schools across South Africa run classes in the Western Cape, Eastern Cape, Gauteng and KwaZulu-Natal. They provide a high-quality learning experience, including teaching and educational materials, for learners from Grade 10 to 12.

For Lutho, it is literally a dream come true.

“Ever since I was in primary school I loved physics and imagined myself working in a laboratory. I’ve never lost sight of my goal,” he says

Hamdulay says it is extremely gratifying to hear such positive feedback from Lutho.

“We strongly believe that we have a responsibility to help young people realise their full potential, and we feel enormously privileged to have played a role in his impressive achievements,” she says.