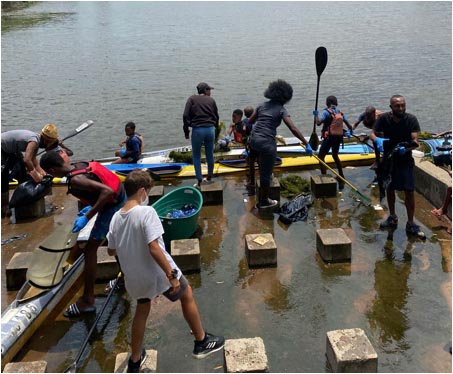 Residents of Westdene, supported by paddlers from the Soweto Canoe Club (SCARC) and WastePreneurs cleaned more than five tonnes of waste from the Westdene dam on Saturday.

The clean-up of the dam was arranged by several concerned residents, after noticing how much it had degraded. Since the first summer rains washed a mountain of litter into the dam, residents started cleaning the dam on weekends. However, the task is overwhelming for the handful of residents involved.

“There are two main inlets into the dam that are stormwater pipes coming from Brixton, Auckland Park, Melville and Westdene every time it rains, they wash a load of litter and refuse into the dam,” says Mark Napier, a resident who is closely involved in the upkeep of the dam. The dam was also covered by a thick, slimy green algae, which is suspected to be the result of sewage leaks upstream.

Rallied into action, the residents arranged a formal clean-up of the dam on Saturday, 4 December. They asked for the support of several businesses and communities that live in the area. One businesses that stepped up was ADreach, out of home advertising and marketing solutions provider, which sponsored R12 000 worth of advertising to raise awareness about the clean-up. SCARC and WastePreneurs both came out of ADreach’s Adopt-a-Project approach, which supports small businesses and communities in need. SCARC and the Wastepreneurs volunteered to assist with the clean-up.

“They day was a huge success, and while there is still a mountain of work left, we managed to get done what we intended to do on the day,” says Elmien du Plessis, one of the organisers of the clean-up.

More than 30 residents pitched in on the day, while 36 paddlers from the SCARC canoe club and eight WastePreneurs from the Pirates WastePreneur site assisted. Various companies such as the Melville Spar, May’s pharmacy and SLKB attorneys donated drinks, gloves sanitiser and funding to assist with the clean-up.

Members of the community and fishermen who use the dam for recreation were extremely impressed by the skills of the SCARC canoe club members, including a 9-year-old girl, who gave up their time to assist with the clean-up.

“The fact that a group of kids from a squatter camp were prepared to give up an entire day to come and clean up this dam is inspiring,” said one of the fishermen from Bosmont. “We don’t even know where these laaitieslive, we wouldn’t go and clean their flippen dam but here they are making a difference for us – incredible!”

While the condition of the Westdene dam seems like a local problem for a local community, it has an impact on the health of communities downstream as well as the environmental health of a large part of the Gauteng river systems.

“The Westdene dam feeds into Emmarentia Dam, and then flows downstream through the Braamfontein Spruit into and eventually into the Hartbeespoort Dam,” says Napier.

“The collaboration of all these communities from different parts of Joburg and completely different backgrounds just shows the neighbourliness of our people and a commitment from various communities across boundaries to work together and resolve the challenges that we are left to face on a daily basis,” says Steve Jourdan, director of ADreach’s Adopt-A-Project programme.