GROWING VEGGIES IN A BOX, WHO THOUGHT OF THAT? 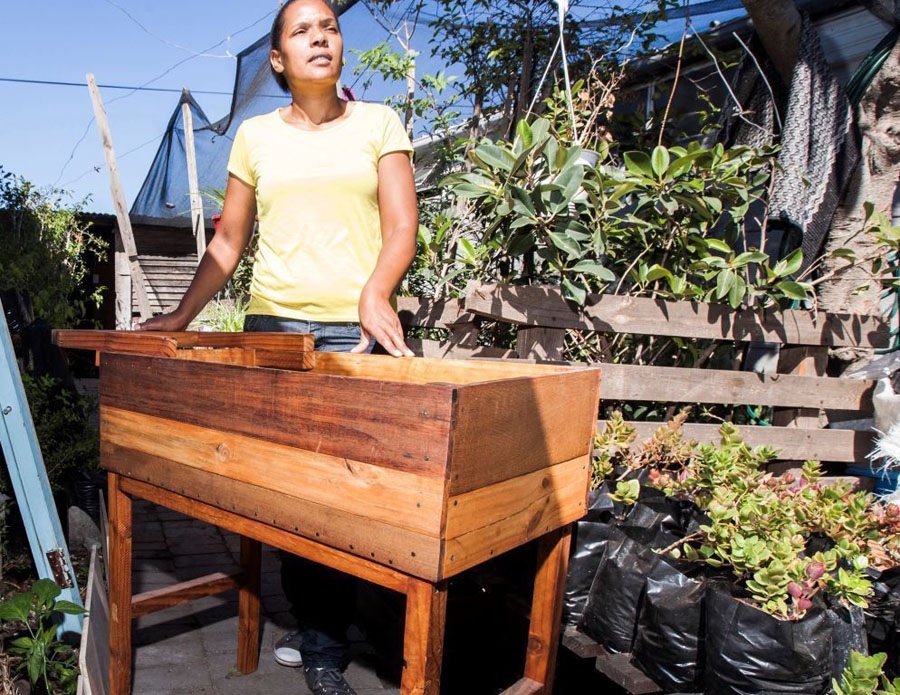 I work with an inspiring woman, Renshia Manuel who is a recognized social entrepreneur in Hanover Park and founder of Grow Box  – a portable vegetable garden that is revolutionising food growing in a community that is most affected by food insecurity.

Renshia first started growing vegetables in her backyard in 2015 to feed her four children, and then invented Grow Box in 2016, a portable wooden box that allows people living in cramped housing conditions to grow their own vegetables. Grow Box can be used by people living in dense, high rise flats with small balconies, as well as backyard dwellers or residents of informal settlements. The box comes with a variety of vegetable seedlings which the buyer can select, compost, three hand tools and beginners manuals. The idea was so impressive that shortly after rolling it out, she won third place at the 2016 Youth Start Cape Town Entrepreneurial Challenge, and was recruited by Red Bull Amaphiko in 2017, an international academy that jump-starts grassroots social entrepreneurs who are making a positive change in their communities. After attending the academy they team up with a one-on-one mentor and together they develop business, personal and strategic development plans that they bring to life over a period of 18 months.

With fuel price hikes now an almost-monthly occurrence, food prices are set to rocket yet again during the latter part of the year – and this will have a serious impact on food security, especially among impoverished urban communities.  Besides rising poverty levels, other challenges to food security include water scarcity and weather variability due to climate change. The rising costs of food and other essentials, such as electricity and water, means that four out of every five households are moderately or severely food insecure, according to AFSUN’s research.  A solution is direly needed.

It’s available in a variety of sizes, ranging from small window herb boxes to patio boxes and larger three tier boxes, depending on the amount of space buyers have. Each box can be also customised to a user’s preference. Manuel teamed up with a nearby rehab centre for men, called The Arc, where men recovering from drug addiction and alcoholism or transitioning from prison life, assemble the boxes for her.   With funding accessed from corporates individuals in the communities are provided with Grow Box, with mini-gardening as well as training.

Future plans are to fund and build a nursery on a piece of land at the Mount View High School in Hanover Park, which will supply other nurseries with vegetables and herbs. With funding that came in earlier this year, the first tunnel was erected and declared ‘open’ on Mandela Day on 18 July.

Below is a link to an interview and video taken of Renshia that demonstrates her passion and determination for Grow Box to succeed.