NOTICE TO OUR SUBSCRIBERS: After 16 years of being our anchor sponsor FNB has decided to discontinue their sponsorship effective January 31 2019. First I’d like to thank FNB for their resolute support over this time. Second, if there are subscribers who would like to submit proposals as to how we can keep www.sagoodnews.co.za going that would be most welcome. I have a number of proposals out in the marketplace, but times are tough.

My dream would be to have a dozen or so aspirant freelance journalists located around the country who could write their stories contributing to our mission of “a balanced and informed narrative providing hope for our future”. I would like to be able to mentor and coach their writing skills and pay them decently if their articles are published. Clearly, I need resources to do this

Please mail me directly at steuart@sagoodnews.co.za if you have a serious proposal

The attached article by Adrian Gore below is exactly what we attempt to do, prevent declinism and deliver confidence and hope in our future by researching and publishing the facts of our progress – good and bad – as a nation.

ADRIAN GORE: Why vision-based leadership is well worth embracing

“SA has huge problems, but only a leadership not seeing a country in perpetual decline will solve them.” Adrian Gore.

This article appeared in Business Day last week, I came across it reading Peter Bruce’s article on the lunacy of Minister Gigaba hanging onto his job when he is so embroiled in malfeasance and scandal. What Adrian Gore has to say is incredibly important, in case you missed it I have summarised it somewhat, the full article can be read here: https://www.businesslive.co.za/bd/opinion/2018-11-02-adrian-gore-why-vision-based-leadership-is-well-worth-embracing/

Adrian writes “I am known for repeatedly making the call for positive leadership, to liberate our country’s incredible potential. What fascinates me is the criticism I receive — for my naivety, in the light of, it is said, the challenges we face.

I am not discounting the fact that we face real challenges. We do: GDP growth is at -0.7%; 50% of those 15-35 years old are jobless; we have a bloated public sector wage bill and a hefty budget deficit to fill; and tragic inequality. My plea for positivity is not in spite of these challenges, but because of them — and it is rooted in cold, hard science.

The optimism paradox — the gap between private hope and public despair — is an intriguing idiosyncrasy explained by behavioural economics. On the one hand is our belief that in our personal lives our future will be better than our past, known as optimism bias. According to recent research from the Nobel prize-winning economist Angus Deaton, based on data collected on 1.7-million people across 166 countries from 2006 to 2016, individuals are unwaveringly hopeful, to the point of consistently but irrationally believing they will be better off five years from now.

Now, about 62% of respondents believe the world is getting worse, fuelled by misperceptions of how the world has changed.

Optimism bias can be explained by evolutionary biology. With our earliest ancestors facing threats posed by violence, disease, childbirth and so on, the average lifespan was 21 to 35 years. To make any kind of progress in life we needed to imagine a reality that was different, and one we believed was possible.

We are in essence, descendants of the optimists — the pessimists died off.

Counterintuitively, however, this private optimism is contrasted to a persistent and pervasive public pessimism known as declinism — the belief that our world (or country) is on an irreversible downhill trajectory. Declinism also has its roots in evolutionary biology. Hunter-gatherers were faced by constant environmental threats and were coded to seek out negative cues, a fundamental conditioning for survival.

In 2017, the global market and opinion research organisation Ipsos Mori surveyed perceptions of 26,489 people across 28 countries as to how the world is changing. About 62% of respondents believe the world is getting worse, fuelled by misperceptions of how the world has changed. The degree of optimism about the future differed hugely by the level of people’s knowledge about global development — those who were most pessimistic about the future tended to have the least basic knowledge on how the world has changed for the better. 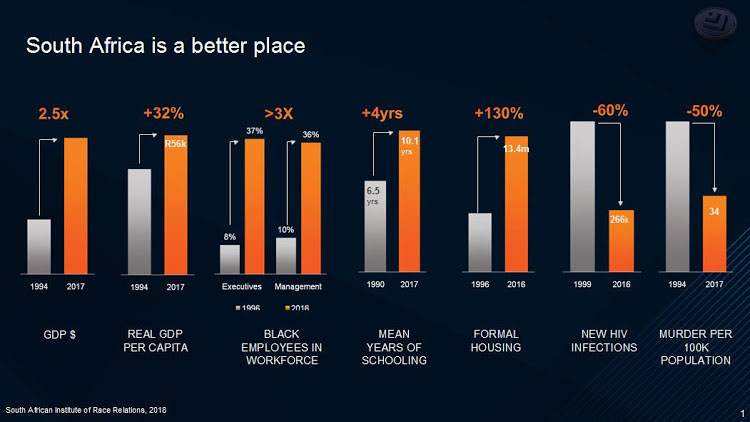 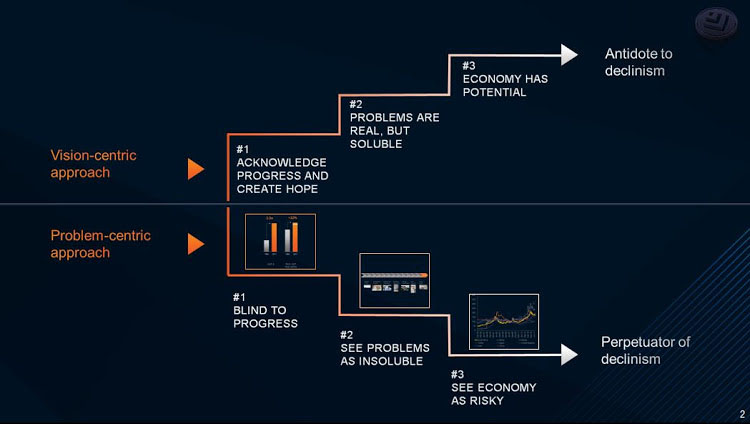 The major flaw in much of the declinist narrative is the failure to distinguish between absolute and relative changes: relative decline is interpreted as absolute decline.

The critical point is that as South Africans we suffer this acutely. Not only are we gloomy about how the world has changed and what the future holds; on a broad range of issues, SA survey respondents gave the least accurate guesses of where the figures on global and national development stood — out of all 38 countries. And while South Africans are not just impervious to the facts on progress, the study revealed they are confident in their erroneous perceptions.

Declinism could easily be excused as a peculiarity of cognition, except it has real and dangerous consequences which impede our progress. Firstly, we don’t see our country’s progress. The fact is SA, like the world, is a fundamentally better place as time progresses. Our GDP is 2.5 times the size it was in 1994 on a dollar basis; formal housing has increased by 131% from 1996 to 2016; new HIV infections have gone down 60% from 1999 to 2016; and the murder rate per 100,000 is down 50% from 1994 to 2017.

Our country is also larger and more relevant than we think. Our provinces square up against other countries in terms of GDP: Gauteng is bigger than Kenya and Ethiopia, and the Western Cape is almost the size of Ghana.

This is important structurally; these long-term savings are invested into government and corporate debt and company equity, driving growth. Our market also enables huge companies to be built. Discovery’s revenue footprint (including Discovery Health Medical Scheme) is more than half that of Mauritius; and both Standard Bank and FirstRand are bigger than all Nigerian banks combined on a tier 1 capital basis.

Secondly, we see problems as insoluble anomalies, and our decline as inevitable. What blinds us from recognising our progress is our myopic obsession with the problem of the day.

All have occupied the public’s attention as the issues signalling our impending demise.

It is precisely because these problems change that they cannot be intractable. The effect of the above is that we start perceiving our country and its economy as risky and we avoid investing, when the opposite should be the case.

SA has a relatively stable economy, as seen by its GDP growth, which is the lowest in volatility when compared against Brics peers from 1994  to 2017. This suggests that we misprice risk and miss opportunities. The rand, however, is one of the most volatile currencies in the same peer set, over the same period. If we consider the country as a “company” we can then use GDP as a proxy for the “revenue” of the country, and the currency exchange rate as an indicator for the “share price”. If we then take the standard deviation of our currency over the standard deviation of our GDP, SA consistently has the highest ratio over time relative to the above cohort.

This suggests a profound gap between perceived risk and real risk.

Our country has remarkable potential, but we need to deliver economic growth, which is vital to tackle our serious challenges of unemployment, poverty and inequality and delivering real improvements to quality of life.

Looking back, had SA mirrored the rate of global or emerging market GDP growth we could have been 17% or 38% bigger (respectively). The Bureau for Economic Research puts the cost of the last 10 years at R500bn, and the opportunity cost at 2.5-million additional jobs. Our rudimentary calculations show this could have had the dramatic effect of halving poverty.

We have a choice: a problem-centric leadership approach as per the above, which perpetuates declinism; or a vision-based leadership approach, which is an antidote to declinism. The latter involves acknowledging our country’s progress and creating hope; seeing our problems as real, but soluble, and seeking out positive cues alongside negative ones when reading our environment; and recognising the potential of our economy and investing in it.

This is how change happens. Attitude drives fundamentals, not the other way around.

On the topic “Factfulness” by Hans Rosling is a great read.