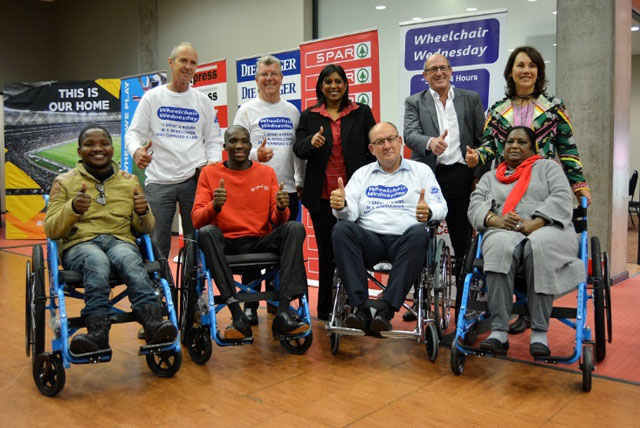 The Wheelchair Wednesday project wrapped up another successful campaign today when it handed over 165 wheelchairs to needy residents in the Nelson Mandela Bay metro.

Organised by the Association for Persons with Physical Disabilities (APD), in association with SPAR Eastern Cape, the concept has been running for six years and APD chief executive Brian Bezuidenhout said it was showing no signs of slowing down.

With more than 100 000 residents in the region having disabilities, he said creating awareness for their challenges remained a priority.

In that time, he said the annual campaigns had generated funds for 668 wheelchairs as well as R2.4-million for needs within the various operational areas of APD in Nelson Mandela Bay.

“We want to involve businesses to see life from a disability point of view and we therefore invited company executives to spend four hours in a wheelchair and to submit a report about their experience,” said Bezuidenhout.

“In this way, we can create awareness regarding issues relating to accessibility for people with disabilities within the business environment of Nelson Mandela Bay,” he said, adding it helped companies to assess and recommend changes.

Bezuidenhout said they had included the city leadership in the campaign this year to get their input.

“We had an extensive involvement from members of the mayoral committee and executive mayor Athol Trollip, himself, spent time in a wheelchair.”

He added that they would continue with the awareness campaign in its current format.

“This model works so if it’s not broken, don’t try to fix it,” he said. “We will, however, involve more and more decision-makers at director level in the future.”

He acknowledged the important role SPAR played in the campaign.

“Their five-year involvement has been the lifeblood of the project. Their sincere commitment to our cause and their trust in our motives have been the key to the wonderful story we tell.”

SPAR EC sponsorships and events manager Alan Stapleton said he was given a sobering introduction to Wheelchair Wednesday.

Linking his experience to his passion for playing squash, Stapleton said he had felt like an outsider when a troublesome sidelined him from the game.

“I felt very sorry for myself,” he said.

“And then I did Wheelchair Wednesday and what a humbling, eye-opening experience it was. I suddenly realised that I had so much to be thankful for.

Stapleton said the initiative had, in a way, brought corporates together because they now had a better understanding of the situation.

“And whether it is a homeless person, someone on the street, a cancer patient or a parent waiting for their child to have a cleft palate operation, when we give someone some time and show we care, we give them hope.”

He acknowledged the donations that were made, but, more importantly, the time given by city leaders.

“We have all learnt to understand and we have all been changed. Hopefully, we have also become aware of how inadequate our facilities are.

“We may have just scratched the surface, but we have given 165 people a chance to move out of their houses, out of their immobility and experience the world.”