Claire Bisseker in last week’s FM reports “They say a recession is the one you talk yourself into. SA is in danger of making that mistake, judging from the rash of doomsday headlines that warn of recession, a fiscal cliff and a weak president beset by enemies.

The narrative that “Ramaphoria” has turned into “Ramaphobia” — a view fuelled by SA’s crushing first-quarter GDP numbers — is countered by President Cyril Ramaphosa’s progress towards his target of raising $100bn in new investment over the next five years. So far, he has raised $20bn from Saudi Arabia and the United Arab Emirates, mainly in energy and tourism; a further R850m from the UK; and R10bn from Mercedes-Benz to expand its East London manufacturing plant.

SA should expect similar announcements from other corporates, according to Standard Bank chief economist Goolam Ballim. He says “there is feverish business everywhere” and the investment undertakings Ramaphosa has secured are “the real deal”.

The envoys include former finance minister Trevor Manuel, former Standard Bank CEO Jacko Maree, former deputy finance minister Mcebisi Jonas and Phumzile Langeni, CEO of the Afropulse Group. All have been going at it “hammer and tongs” since their appointment in April, says Manuel.

Manuel has spoken to about 60 companies in New York, London and Dublin. These include foreign-headquartered firms with local operations and corporates who’ve been holding positions on SA for a while but are looking to locate the country in their global supply chains.

The envoys’ message to investors is that SA is on the cusp of a cyclical upswing and a structural reboot that could make for the most exciting investment opportunity in the country since 2002.

Manuel says there is a similarity to the 1994-1996 period when, as minister of trade & industry, he travelled the world introducing SA for the first time. But the fact that he is no longer in government might be an advantage. 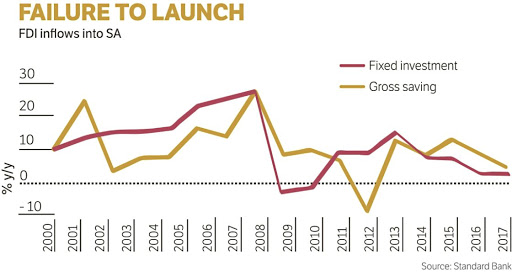 In my humble view this is remarkable progress and I fully anticipate that we will see an uptick in both the amber and red lines in the above graph as we lurk towards 2019.

In the best interests of the country I also hope that we will see a united ANC participate in the 2019 general elections and that president Ramaphosa will receive a strong mandate from the electorate.

As Max du Preez says (see newsletter) “I do know that he (Ramaphosa) believes that unifying the party and achieving a resounding victory next year will give him the mandate and the power to at last implement his real vision for South Africa.

I suspect we will see a different Ramaphosa after next year’s elections if the ANC gets 55% or more of the vote. A bolder Ramaphosa who will shrink Cabinet and government, get rid of the last rotten apples in government and take some unpopular steps to jack up the sluggish bureaucracy and revitalise the economy.”