GLOBAL POLITICS – What will CHANGE with TRUMP IN CHARGE of the USA?

I recently received a number of mails regarding the dawn of the Trump era. The first appeared on the Dave Weinbaum blog site and the second from John Robb, both are ‘US Political Commentators’ and are somewhat out-spoken. Two major issues arise, Weinbaum talks of the rise of populism, conservative thinking and right-wing politics and the implications for the global economy, and John Robb talks of the massive shift in US ‘defence thinking’ from a ‘national security’ strategy to a ‘trade security’ strategy. I conclude with some implications for SA.

The Global Scene Dave Weinbaum’s blog site argues www.daveweinbaum.com, “The world is changing and has become very high risk, and the black swans are circling. We just entered a major inflection point in history.  I have been reporting that in Europe the right wing is ascendant. Le Pen is likely to win the French election next year. The EU is going to come apart once that happens and now with Trump in power that trend will accelerate. The EU will realign into blocs and there will be massive turmoil as things sort out over the next several years. The French will go back to the Franc. Germany will shift right as the refugees create social, crime and fiscal issues. As ISIS gets destroyed they will try to wage war in Europe thru more terror attacks. You do not want to invest in Europe. The world is rapidly shifting right and the changes will be generational. Brussels will be neutered. NATO countries will invest much more in defence and will be forced to build up their armies.

The US Scene Here is what I believe will happen in the US. Trump has two years to make massive changes and this is what I believe they may be. Obamacare is replaced with some type of more free market plan that Ryan already has.
Corporate taxes will be reduced to maybe 15% or maybe a bit higher.
Personal taxes will be reduced.
All executive orders by Obama will be reversed. Most of the massive regulation Obama put in place will be cancelled.
The Supreme Court will get a conservative justice right away and Ginsburg will try to hang on until she dies in office to try to deny him her seat. She will not last 4 years. Trump will get at least 2 and maybe 3 judge picks. The Supreme Court will be much more pro-business. Antitrust cases will go away.

The border will somehow be secured and Mexico will not pay. Border Patrol will be materially increased. Gang members will be arrested and deported but everyone else will get to stay here. Ryan will stay as Speaker. Trump will redo NAFTA (North American Free Trade Agreement – affecting Mexico and Canada in particular) and will walk from the table if he does do not get what he wants.
There will be a revised NAFTA but Mexico will suffer a lot because many US companies will not move plants there until they see what revised NAFTA says. They will also not defy Trump early on and risk his wrath. Mexico takes a big hit.

The Pentagon and US defence contractors are big winners.  Defence spending will ramp up by huge numbers.  The military will add over 200,000 people over the next two years. Weapons spend will dramatically increase. This will add a lot of new jobs between the additional military and the added jobs in defence plants.
Private equity will take a big hit with carried interest going away and this will make a small part payment for the tax cuts. Estate taxes will mostly go away. Cops will be respected again and racial strife will end as Trump tries new ideas to build charter schools, and rebuild the ghettos. The downtrend in crime will get reinstated. Rules of engagement will be changed to kill the enemy instead of cater to political correctness.

There will be an infusion of another 5,000 US soldiers into Iraq and more into Syria to back up the destruction of ISIS.The bombing campaign will be stepped up to what it should be. By March ISIS will have been defeated. They will try to carry out major terror attacks, but now the world will call Islamic terror what it is and there will be a more aggressive fight and coordination. Putin and Trump will get along. Putin is like all bullies he will realize he cannot push Trump around like he does Obama and he will work out a modus vivendi because he knows he has at least 4 more years to deal with a new US president. Bullies back off if they find they cannot intimidate the other guy. The Iran nuke deal will get torn up and Iran will find itself back under sanctions.
The Germans will scream but Merkel is now in a very weak position so she will not be able to stop Trump from re-imposing them at least for US companies and anyone wanting to do business in the US especially banks. This will be world changing.
The Saudis won big on this, Israel won huge. Climate change legislation is dead and the Paris pact will be defunct. Most important the entire world is about to change. We will see if for good or bad but change it will in massive ways.  The tide of anti-socialist, anti PC, anti-diversity, anti-entitlement, anti-establishment of the past 70 years is washing across the world and Trump is simply the ultimate example of what had already been happening with Brexit and in Europe. As far as the stock market- it will now rise.  Taxes will get cut, the Supreme Court will not be activist, anti-trust will end, some type of infrastructure program will be instituted, defence spending will jump, banks will be free to lend, regulations will be drastically reduced, and corporate profits will rise.

John Robb says, “Since WW2, US foreign policy has been completely dominated by national security policy.  In fact, it’s hard to imagine a US policy that doesn’t view the world through a militaristic, cold war lens.  This means that ALL other aspects of foreign policy are conducted in support of (slaved to) national security policy.  In particular, US trade policy is configured to promote the economic growth of allied nations (originally to fight the cold war) even if this trade relationships damages US economic performance.

Trump inverts that policy relationship.  In Trump’s post-cold war world, US foreign policy will be dominated by trade policy.  Even national security policy will be subservient to trade policy.  If trade policy is dominant, we’ll see China, Mexico and the EU (Germany) become competitors.  Russia, in contrast will become an ally since it doesn’t pose a trade threat.

National security under this regime will be used to reinforce and grow positive trade relationships.  For example, military tension with China creates the opportunity for sanctions that simulate the function of tariffs (allowing the US to circumvent trade organizations and domestic resistance to tariffs).   In a national security policy slaved to trade, any and all security guarantees extended to other nations will require a positive trade arrangement with the US.  The US simply won’t protect or extent security guarantees to any nation that has a non-beneficial economic relationship with the US (i.e. runs a trade deficit).

Ranjeni Munusamy of the Daily Maverick writes: “And in terms of how the United States will relate to the world, Trump said:

“We will reinforce old alliances and form new ones, and unite the world against radical Islamic terrorism which we will eradicate from the face of the earth.”

Around the world, government officials will be trying to decipher what this means for bilateral and multilateral relations. In South Africa, officials say they are hoping that not much changes in the relationship between Pretoria and Washington in the course of this year. There is hope that once a new leader of the ANC is elected, a new relationship with the US could be forged. 7

Government insiders say South Africa had a better functioning relationship with the Republican government under George W Bush than with the Obama administration. The President’s Emergency Plan for AIDS Relief (PEPFAR), which provides antiretroviral treatment to South Africans, and the African Growth and Opportunity Act (AGOA), which allows African countries to export duty free to the US, were introduced during Bush’s term.

A dispute arose with the US when the AGOA agreement was to be renewed. After months of head-butting over American chicken imports, during which time Obama threatened to revoke the duty-free status of South African agricultural produce, an agreement was finally reached.

Some of the Republican bureaucrats who were in the Bush administration, and had retreated to think tanks, are now returning to the State Department. South African officials say they hope that they will resume a good working relationship with such people and thus be able to smooth over any problems with the Trump administration.

But this is a time of great volatility for the world, particularly with Trump and his officials’ proclivity to attempt to alter reality – “alternative facts” as Trump advisor Kellyanne Conway put it. Thus, many countries are uncertain about how to relate to Trump.

Other than the congratulatory message, South Africa has not made any statements on Trump’s presidency. It remains to be seen how long it would take before there is contact between the two administrations, and what the relationship is likely to be like between Trump and Zuma. 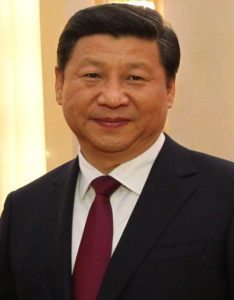 What are the bets on President Zuma meeting with Xi Jinping

of China before he meets with Trump of the USA?

As the world watches and waits nervously, the ‘America First’ campaign is set to clash with the China ‘Free Trade’ overtures at Davos.