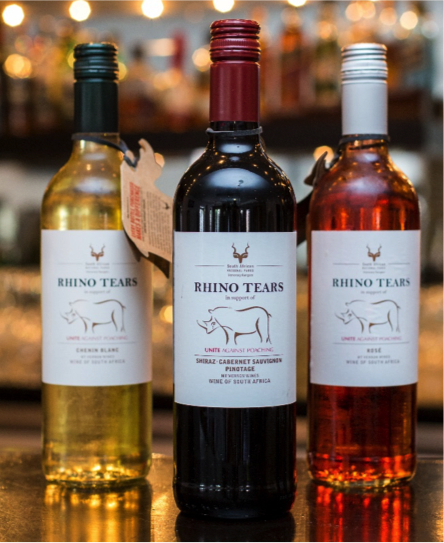 Rhino Tears wines has raised an impressive R1 million since the launch of a marketing drive to raise funds to be used in the war against rhino poaching in South Africa’s national parks (SANParks).

The money raised has been paid over directly to SANParks Honorary Rangers who have used the funds for anti-poaching projects in SANParks.

The Rhino Tears wine range, from the Mt Vernon estate in Cape Town, sells at about R55 a bottle, with R15 from each sale going directly to SANParks Honorary Rangers. Wine lovers can be confident that 100% of the funds raised through sales of Rhino Tears are used for anti-poaching projects in SANParks. Projects supported by the brand include the training of tracker dogs used to track poachers on the ground and to purchase equipment for field rangers.

“Every bottle purchased really makes a difference. The cost of the anti-poaching war is expensive and the men and women involved need all the support they can get to fight a ruthless enemy. We have the opportunity to save the rhino from extinction; never has the call been greater or the opportunity more urgent than it is now. Thank you to those who have helped us reach R1 million in donations,” said John Hooper, founder of Rhino Tears. 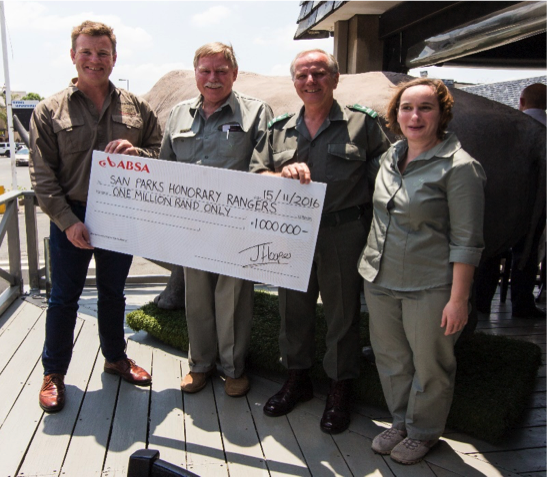 Funds also contributed to the delivery of equipment valued at R1,6m to field rangers. This donation included tents, rifle slings, sleeping bags, camping equipment, rifle cleaning kits, back-packs and various other essential items for use by the rangers in anti-poaching operations.

SANParks Honorary Rangers Chairperson Louis Lemmer said: “In the war against poachers, rangers have to endure extreme hardships – being away from their families and facing constant dangers from poachers. So, if we as SANParks Honorary Rangers can make a difference, by making their work easier, we are adding to their effectiveness in the bush. The equipment supplied to the field rangers answers that need.”

Lemmer said this was again an example of how funds, raised by the SANParks Honorary Rangers volunteers, is spent effectively and where most-needed.

“We are always grateful to our sponsors and hope the application of funds, as in this case, will inspire others to support the efforts of SANParks Honorary Rangers,” Lemmer said.

Rhino Tears wine is available for purchase in major retailers around the country, including Ultra Liquors, Makro, Tops, Spar, Fruit and Veg City and major independent retailers. It can also ordered online at www.rhinotears.co.za.

Those supporters who wish not to purchase wine can make a donation via the Rhino Tears SMS donation line. SMS the word Rhino to 38730 and R10 will be collected for the campaign.

Further information about the wine and the anti-poaching initiatives can be found at:

The Mount Vernon Wine Estate was founded just under 20 years ago, in the Klapmuts area, just outside Cape Town. It is owned by the Hooper family, who have been selling and marketing wine and spirits since 1848 under the name Edward Snell & Co.

The name Mount Vernon comes from George Washington’s home in Virginia, USA, a large and well-proportioned mansion, yet appealing and unpretentious for such a great man. Vernon is also the middle name given to almost every member of the Hooper family for many generations, in memory of Vernon Edward Hooper, a revered patriarch of the family who died in Durban in 1954.

Further information can be found at: www.mountvernon.co.za

SANParks Honorary Rangers is the official SANParks volunteer organisation, functioning according to an official agreement with SANParks. It is a group of passionate volunteers who give freely of their time and skills to support conservation in the South African national parks. SANParks Honorary Rangers provides the people of South Africa and the business community with the opportunity to support South Africa’s national parks, and SHR is SANParks’ preferred channel for public support.

Further information can be found at: