From Grassroots to Greatness: The positive after-effects of the West Coast’s first sports youth development program

The first sports community outreach programme for children from previously disadvantaged backgrounds ever to be held on the West Coast in the discipline of boxing took place at the Navy base SAS Saldanha in 9 December 1998, with the positive after effects still lingering to this day…

This community outreach program served firstly, to positively influence children; providing role models, exposing them to a healthy activity and thereby turning them away from a life of crime. Secondly, to contribute towards community building – seen as regional aspect of nation building – with the bringing together of major aspects of the community: youth, government, local businesses which supported the event and the South African National Defence Force (SANDF). In the process strengthening the SANDF’s relationship with the local community.

A recent reunion with the organiser of the sports outreach program Claudio Chiste – who returned to Saldanha as the Training Commander of the Warrior Training Centre to train the South African Navy in mental toughness – almost 20 years later highlighted how that memorable experience changed the life of Macneal Samuels, the then 11-year child who is today a 29-year old man.

When asked about his most memorable moment of the programme, he highlighted, “I remember I was so excited to attend this sports day in the navy base of SAS SALDANHA. After learning punching techniques and self-defence, we had to spar one round. I remember being knocked down… I remember being cheered on being encouraged by the coaching staff that ‘I could do it’… I forced myself to get back on my feet to finish the round and successfully complete the programme, being awarded my certificate. That taught me a valuable lesson about life.”

FLASHBACK: The photo which appeared in the leading newspapers covering the outreach program. The inset features Macneal Samuals, with organiser Claudio Chiste centred in the background and former boxing world champion, Gary Murray, in front of him. 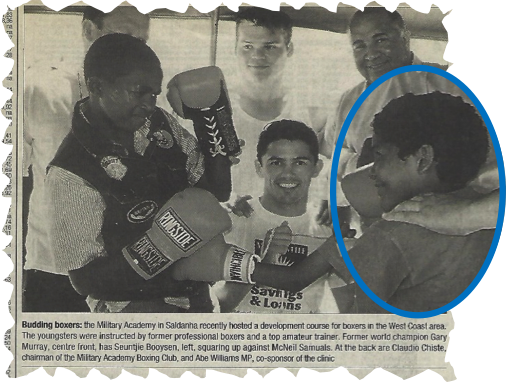 Following the sports development program, Macneal was inspired to apply himself in life to reach success. Not only did he make the Boland provincial chess team and regional volleyball team where he was fortunate to travel around the country, he’s also now playing for the first team of Saldanha, where they recently won the golden trophy following their victory over their fierce rivals, Vredenberg.

Today as a young man: Macneal with the ball, playing for Saldanha on their way to winning the trophy against their fierce rivals 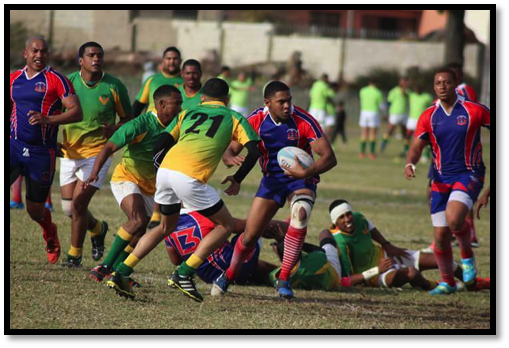 Whilst being active in sports, he’s working part time to fund his studies which he’s been doing simultaneously. Macneal’s completed his NQF level and N3 in mechanical drawing, maths & science. In his spare time, when he’s not playing competitive rugby, working or studying, he’s a youth leader in his local church.

Macneal will be starting his N4 later this year, thereafter applying to go on the next mechatronics programme to qualify as a technician, specialising in electrical, mechanical, and computer technologies. It is a 6-year programme, so quite an undertaking to which he is fully committed.

On recalling the major lasting impression of that day, he said “This generation of youth needs hope, it is our job to make sure they don’t perish or waste their talent. There is extreme poverty in the region, but that does not necessarily need to be one’s destiny. That sports programme planted the seed that we can all be destined for greatness.”

Through sports not only can we inspire others to make something of themselves and develop their talents; they could serve as role models, providing a wider contribution to the community inspiring further youths from underprivileged backgrounds to see that “it can be done”.